“Back in my day it was a shameful thing to be dependent on the government. If you were a man, you’d do whatever you could to provide for yourself and your family.”–My Dad.

My dad is a staunch conservative and was #TeamMAGA from day one. I’m actually about 99% sure that my dad voted for Donald Trump in the GOP primary. Why? I don’t know.

Actually I do, my dad wanted someone “different” in Washington. Someone who wasn’t afraid to “call it like is,” bucking the toxic “politically correct” culture that was clearly the root of all evil.

Growing up, our nightly routine at 7pm was to watch the O’Reilly Factor with my dad pausing the show every 3 minutes to add his own commentary. That’s the environment I grew up in.

In his eyes, anyone who had to depend on the government to survive was lazy, entitled, or unwilling to work. Growing up, I really didn’t know different, so I agreed.

I grew up wealthy, but I didn’t know it at the time. At 16 years old I probably would have admitted that we were above average, or that we were well-off, but I certainly would not have said rich. I mean, compared to my friends and classmates I truly was “average.”

But I was “average” in one of the wealthiest zip codes in the state of Texas.

When you’re 16 though you don’t really have perspective on those kinds of things. My first car? Paid for. My college education? Paid for.

Needless to say, my view on life was a bit narrow.

I have friends in real life and in the world of personal finance bloggers who are fighting tooth and nail, scrimping and saving, side hustling, and doing everything they can to pay off their student loans.

I have SO MUCH FREAKING respect for these people who write about their journey to get out of student loan debt:

This is actually the main reason I don’t talk much about student loans on this blog is because I would feel like a fake. I haven’t had to fight that uphill battle and I won’t pretend like I did.

I’ve come to realize just how incredibly fortunate I am. In a lot of ways, I feel like I’ve already won the lottery.

I love my dad and I still hold to conservative values, but my perspective on these things started to change when I actually met people from different backgrounds and life circumstances. The sharp edges to my young conservatism have been rubbed smooth through the gracious conversations and people I’ve met. 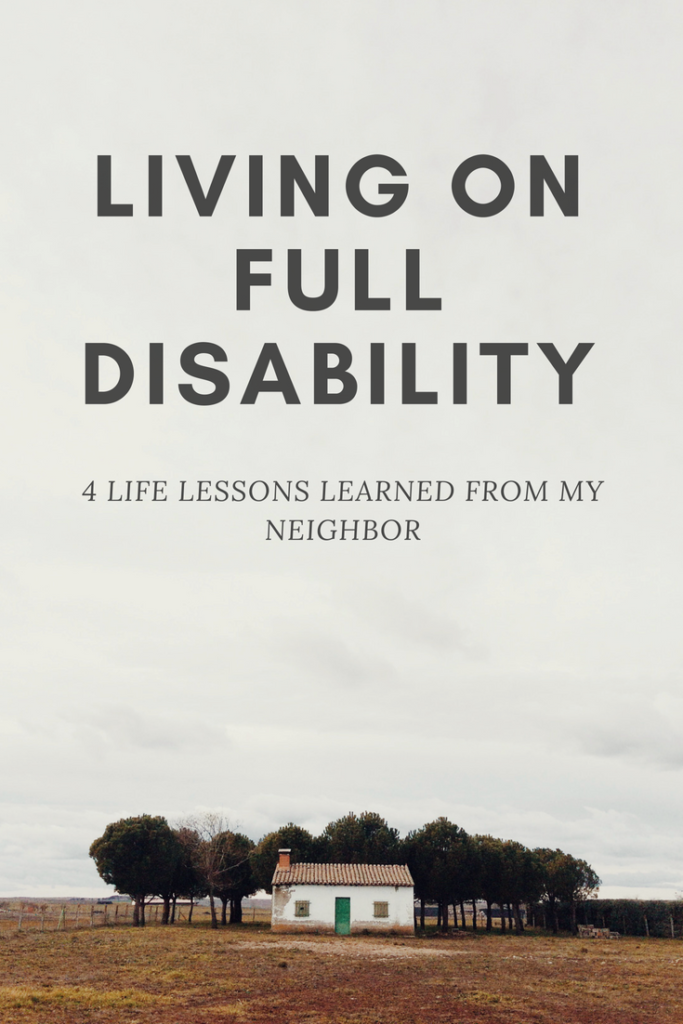 4 Life Lessons Learned From My Neighbor

Today I want to share how my neighbor, let’s call him Chad, has changed my perspective on some of these things. You see, Chad is on full disability. He doesn’t work and he spends 99% of his time at home. He’s honestly a bit crazy, but he’s one of the most warm-hearted and caring people I’ve ever met.

I’ve learned a lot from Chad over the past two years. He’s a fellow ODO (obsessive dog owner), coffee drinker, and we often talk for hours about religion / faith. The longer we’ve been neighbors, the closer of friends we’ve become.

About 8 years ago Chad had a brain tumor (and possibly cancer?) that had to be removed. Since the surgery he has been unable to drive because of seizures and when combined with crippling migraines and extreme exhaustion he hasn’t been able to work.

His life is hard, but his perspective is inspiring.

The first thing I’ve learned from Chad is that money won’t make you content. Chad has had a rough go over the last ten years. Cancer, tumors, divorce, lengthy hospital stays, and bankruptcy.

Despite all of this, he has maintained a positive outlook on life and he has said countless times that he no longer longs for a big house, material possessions, or a million bucks in the bank. He just wants to be happy and spend time with his daughter.

Honestly, I wish I had the same level of contentment that he does. I’m embarrassed to say that far too often, my attitude and view on life is dependent on how our finances are doing, how much we’re saving, and how the stock market is performing.

The truth is that no amount of money will make you happy or content.

People Living on Full Disability are not lazy

I honestly used to think that people who are on full government assistance were just lazy. Having spent the past two years getting to know Chad I’ve realized how wrong I was. He isn’t lazy. Yes, he’s dependent on the government to get by each month, but here’s the key thing…

He doesn’t want to be. In fact, he wishes more than anything that he could work, provide for himself and his daughter. He wishes he could go out and contribute value to the world through a career. He wishes that he could still practice as an attorney. In fact, he’s asked me a number of times if there is anything he can do up at our church to make a little bit of cash.

But he can’t. He can’t do any of those things.

Because if he went back to work he’d be giving up his disability pay and he would immediately have to start paying back the debt he defaulted on. After all of the medical bills were totalled up he had over $1,000,000 in medical debt and at the time he was unable to work so he had to declare bankruptcy.

This one has been the hardest for me to accept. When Chad was my age he was starting his career, working overseas for the USO, and when he came home he started practicing law. He got married, had a daughter, and then life took a sharp turn for the worse.

In his own words, his life came crashing down. He never imagined he would get cancer, be hospitable bound, or struggle to get through each day.

I’m 25 and haven’t been to the hospital since I was 12 (appendicitis). The most sick I’ve been in the last 6 years is strep throat and it cleared up after 3-4 days of antibiotics.

Chad tells me often, “Rich, enjoy your health. Never take it for granted like I did.”

The reality is that good health for a lifetime is not guaranteed. Getting and staying healthy is one of my priorities for this year! 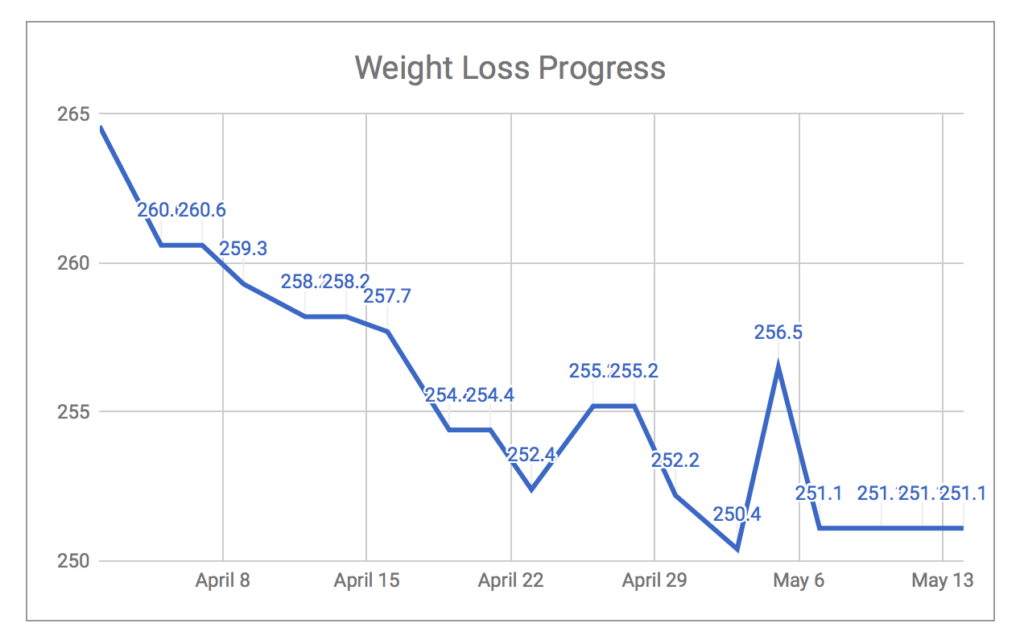 I’m already down around 15lbs! I’ve been doing this through getting back into the gym 4x a week and trying to eat healthy. Preparing food ahead of time has been a game changer for me. So far I’ve been able to save around 20% on my grocery spending by using this list of meal prepping recipes.

I really think that too many people fall into the trap of thinking that they need to be rich in order to be generous. I get that people want to take care of themselves before taking care of others, especially when it comes to giving with their finances.

What I love about Chad is that he has found ways to be incredibly generous that don’t require wealth.

He helps our downstairs neighbor carry in her groceries. He sits with the grandma next door for hours just to give her company and someone to talk to. Best of all, he watches our dog a few days a week whenever we are at work all day! 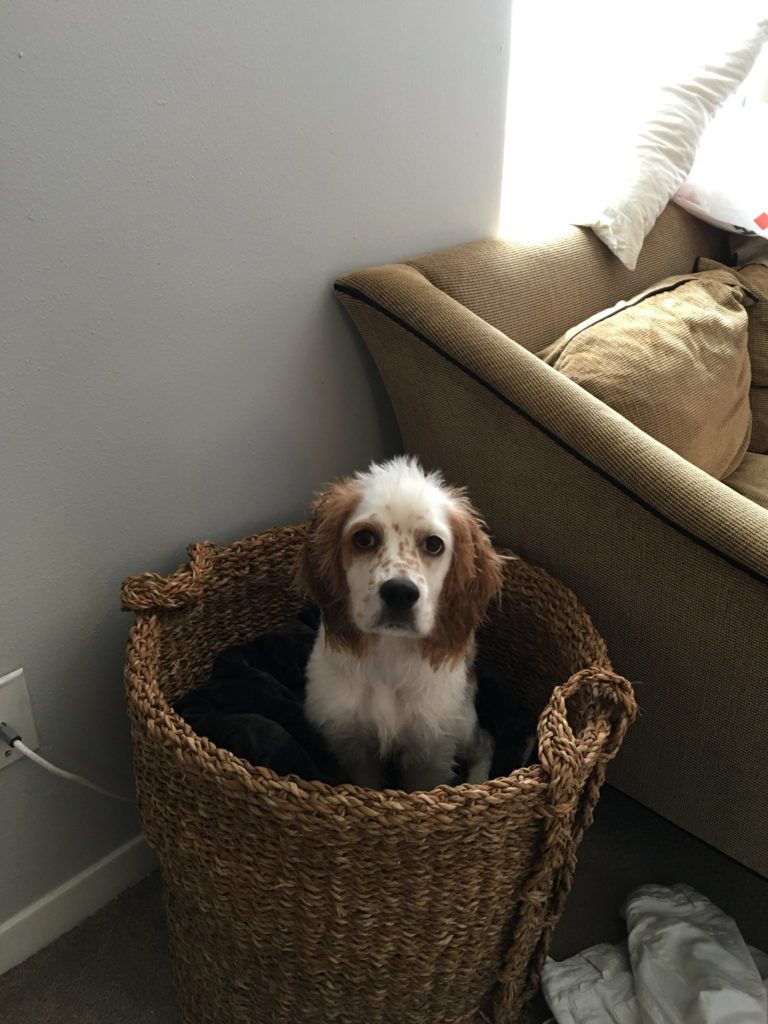 From what I’ve noticed, people who have generous hearts find a way to give regardless of money. People who don’t want to be generous will always have an excuse or loophole to avoid it.

This post obviously is different from the majority of the content I write (how to save money and manage your own finances). Over the past year I’ve been trying to drill down and challenge some of my own assumptions and beliefs.

We can all stand to learn from those who are different than us, who have had different life experiences, or come from different backgrounds. Odds are, you’ll change some of your own beliefs and be inspired to make some changes in your own life.

I’d love to see y’all hop in the comments!

What’s an assumption you used to have that has been changed recently?

What are some that you practice generosity that don’t involve money?