Anyone else tired of these headlines?

Whenever I first stumbled into the world of personal finance, these articles used to fascinate me! I’d click and read almost every one of them trying to gain some new insight or discover some unknown tactic that these success stories had to offer.

It wasn’t long until a pattern started to emerge.

The advice was all the same: cut your expenses, live below your means, start a side hustle, take advantage of employer retirement accounts, and invest over time. Revolutionary!

However, most of these success stories failed to mention one key ingredient: a high income.

Don’t get me wrong. There is absolutely nothing wrong with making a lot of money.

Most of the people I know who made a lot of money and retired early are now putting all of their time and energy into new ideas and causes to do good in the world.

Reading articles about people paying off more debt in 6 months than I make in a year was inspiring at first but after a while it had the opposite effect. I found myself frustrated, impatient, and questioning my career / life choices.

Many of these success stories are of people who are highly educated, have heavily invested in post-grad education, or who have launched successful side businesses that bring in serious additional income.

They work hard and most didn’t accidentally stumble their way into high-income careers. They sought them out and purposefully chose career fields that would likely earn a high income.

Isn’t earning more money in our careers something we’re all working towards?

I’m grateful to call many of these people friends and this post shouldn’t diminish their effort.

This post isn’t a hit piece on high earners. That would be incredibly dumb, pointless, and a waste of my time to write and your time to read.

Some people will argue that the path to FIRE is the same across all income levels. It’s true mathematically–save 50% of your income for 10ish years and if the market returns its historical average, then you’ll be able to retire. If you want to know how far you are away from FIRE-ing, checking out this FIRE calculator.

I don’t have any stats to back this up, but my gut tells me that the only people saying, “The math is all the same” are people who make a high income.

The math might be the same but the path to financial independence on a low or middle class income is night and day different.

But how exactly is it different? 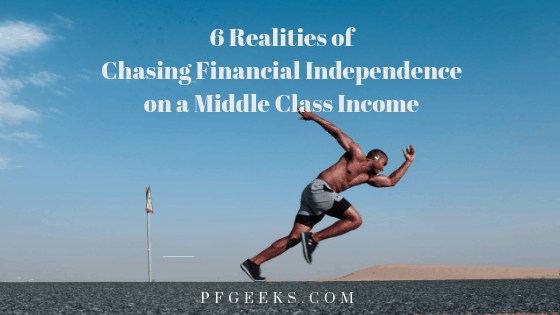 6 Realities of Chasing Financial Independence on a Middle Class Income

If you’re chasing after early retirement while working in a low-middle income career, then you need to face the realities that are unique to your situation.

The problem comes when you compare yourself to those earning 2-10x more than you do. The reality is that your life and your path to financial independence will look drastically different.

1. It will take longer

This one is obvious, but the more money you make, the quicker you can reach financial independence.

If you are saving 50% of your income, then the math says that you should be financially independent within 10 years.

But saving 50% of a low income salary is dang near impossible.

Sure there are examples of people doing exactly that. They usually live in LCOL cities or have gotten creative with how they save money, but for most people, making less simply means that it will take longer to reach financial independence.

Now, the only way it won’t take you longer is if you’re willing to live on much less once you are financially independent.

I will say, I hate the phrase “lower standard of living” or “low quality of life” because if you are spending money on the things you value and are happy, then no one has the place to tell you you are “less than.”

3. It will take more sacrifice

Someone earning $100k a year with a 50% savings rate is living on how much they average household earns a year. They’re able to save a substantial amount of their income and do so by making some sacrifices, but where they draw the line on frugality is where the average household starts.

If you want to be able to spend more in early retirement, then you’ll have to be willing to make extra sacrifices on the path to get there.

That’s how life currently is for my wife and I. We’re doing everything we can to put money away now and we are outworking most of our friends in the sacrifices we’ve made. We know we want to be financially independent in our early 40’s and we know that we want to be able to travel and spoil our future grandkids.

So we’re working hard and making sacrifices now to get to that point.

One of the most negative things about being an avid reader of personal finance blogs is the amount of discontentment it produces in my life.

I LOVE what I do. I get to teach people what it means to love God and live like Christ. As a youth pastor I get to play an influential role in people’s lives.

But there isn’t a week that goes by where I don’t question my life and career decisions.

Questioning your career isn’t bad, but you can’t beat yourself up for not being a 6-figure earning lawyer or a doctor who makes $250k a year.

I know I could make more money in a different career, but at the end of the day, life is about so much more than dollars and cents.

5. Frugality is good but not enough

For all my low-middle income earning friends out there, being frugal isn’t a choice or something we practice for fun. It is a necessity.

Exercising those frugality muscles by finding more ways to save money, cut costs, and live on less will help you start building your financial snowball.

At some point though, frugality isn’t enough to reach financial independence faster. You need to increase your income through promotions, raises, or making money on the side.

If you’re looking for more ways to be frugal, download my massive PDF of ways to save money!

6. You will get frustrated and impatient

If you’re chasing financial independence on a middle class income then you will likely get frustrated and impatient at some points.

I know the feeling.

You’re doing all the hard work in meal prepping, DIY-ing everything, and saying no to constant opportunities to spend money. You’ve optimized everything you can when it comes to your finances and guess what?

You still have 10-15 more years until you’ll be financially independent. It’s easy to get frustrated or impatient when you realize this, but there are several things that can help.

Don’t get me wrong! We can all learn from those who make more than us, save more than us, and have reached financial independence before us. Take what these high income earners are doing and find nuggets that you can apply for yourself.

But don’t let yourself get in the downward spiral where you beat yourself up over your lack of income or lack of progress.

The best thing you can do is funnel and focus that energy into other getting creative with your money or hustling on the side.

2. Finding joy in the journey

If you’re chasing financial independence on a middle class income, then it is especially important that you find joy in the journey.

Having a long-term perspective is important. Everyone chasing FI has got to make sacrifices today for their life tomorrow. Anyone can knuckle down when you are just a few years out but if you have 10-15 more years, you can’t keep waiting to live your life.

If you’ve got a long path to financial independence, then the more you enjoy your work, the more you’ll enjoy the process.

No situation is more difficult than making hardly any money in a job that you hate. If this is you, endure for as long as you can, keep building your financial safety, and apply for jobs.

4. Find resources & communities that “get” you

Once you have the knowledge and practical “how-to’s” mastered, this whole money game is just a matter of time and consistency. One of the best things that has helped me in this journey of chasing financial independence on a middle class income is having people that “get me.”

That’s why I about a month ago I started helping out with a new site called MoneyMiddletons, a site that curates the best personal finance content for middle class earners.

If you’re looking for advice and content that will help you save money, make money, get out of debt, and save for retirement–all with middle class earners in mind–then check out the site.

If you don’t make much money then one of the best things you can do is start a side hustle. The more money you can make in your off hours, the more you can funnel into investments and savings. You don’t have to hustle forever, but the quicker you can build up your investments, the more time it’ll have to grow.

Some helpful articles to get started:

Hierarchy of Hustling by Apathy Ends

How to Start a Blog by Pete McPherson

If you’re chasing financial independence on a middle class income, then you’ve got some unique challenges but that doesn’t mean it’s impossible! It just means it may take you a bit longer or you’ll have to make more sacrifices than others.

Any of you out there have a side hustle that’s working for you? Drop a comment below!

We are a participant in the Amazon Services LLC Associates Program, an affiliate advertising program designed to provide a means for sites to earn advertising fees by advertising and linking to Amazon.com. Amazon and the Amazon logo are trademarks of Amazon.com, Inc or its affiliates